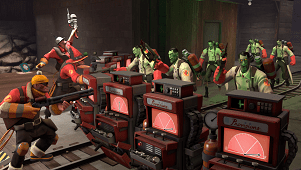 Virus is a unique gamemode I wrote to create a new atmosphere and objective of gameplay. The concept is a themed invincible 'virus' vs 'survivors' scenario, but each kill converts the dead player into a zombie, and their objective takes a 180 turn.

The gamemode incorporates several technical mechanics such as:
• Dark fog engulfs the entire map, and players can only see a certain radius around them.
• Infecting survivors causes them to be respawned, and teleported as a skinned zombie
• Particle systems engulf the infected players in fire, but are only transmitted within a certain vector distance of the players.
• Sound alerts signal the distance of a virus with increasingly intense music.
• Entity manipulation used as a fallback if the map does not contain the necessary point entities or door functionality.
• Player radar outlines players every few seconds which adjusts itself according to players remaining.